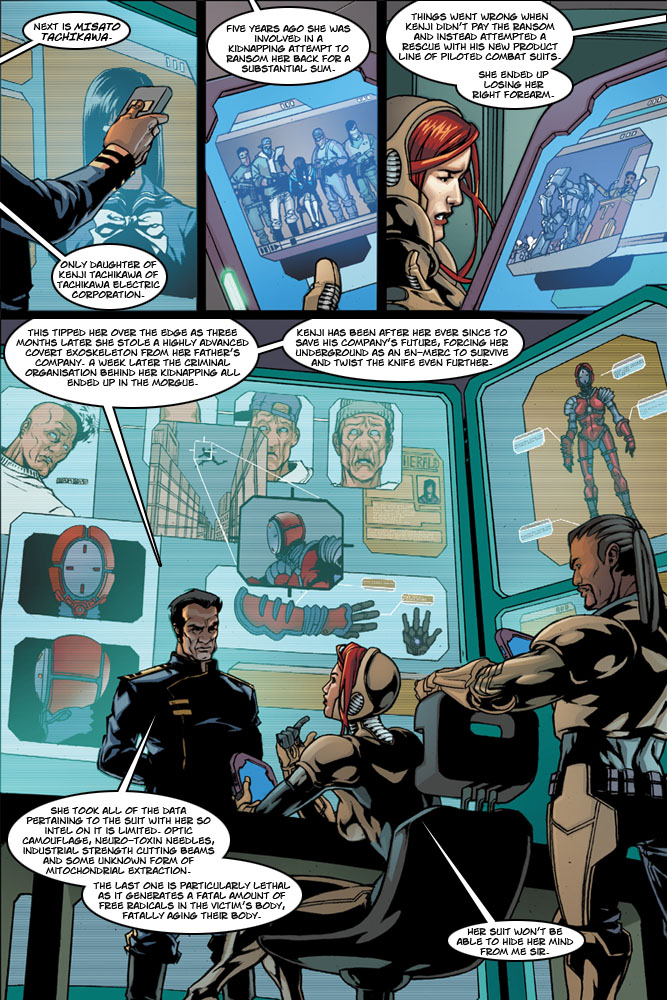 Being the sole heir to the Tachikawa Electric Corporation, her father’s vast business empire, was a lot of pressure to bear when growing up. This did provide her with the best tutors and coaches money could buy, allowing her to excel mentally and physically, but left little left in the way of a normal childhood. With little time to make friends, and the ones she did make being too intimidated by her success and fortune to stick around.

The pressure and isolation built and grew inside of her over the years, which would have festered into standard contempt and resentment for her father over time were it not for a series of tragic circumstances. One day, on her way to school Misato was kidnapped and held to ransom at gunpoint. Rather than pay the ransom he could have easily afforded, her father instead decided to attempt a rescue and demonstrate his new line of piloted combat suits to the public. She was rescued, but not before a malfunction in one of the suits directly led her right forearm being irretrievably crushed in the attempt.

The burden of her father’s legacy, his risking of her life for his companies PR and the physical trauma of losing a limb all lead to Misato mentally breaking down and exacting a trail of revenge. Her first act was to steal a prototypic covert exoskeleton and destroy all of the data and personnel pertaining to it from her father’s company. The suits power enabled her to single handedly hunt down and murder all of the criminals involved in her kidnapping.

All of these acts lead her to be a wanted lady by the authorities, criminal underworld and most importantly her father. The suit represented a significant investment by the Tachikawa Electric Corporation, and without the knowledge to rebuild it the only hope for the company to survive is its retrieval. His desperation and companies remaining resources make him the most dangerous of her pursuers.

Her only option for survival was to become an En-Merc and disappear into its dark and covert underbelly. Her intensive education put her in good stead for the profession, granting her the physical and mental acumen it takes to survive in such a cutthroat world. It also prepared her for the isolation such a life offers, though she does have a companion, of sorts, in the form of her suits artificial intelligence, Alf. Having taught it its personality and behaviour, it makes the perfect companion for her.

After many years she has managed to stay alive in the En-Merc industry and keep one step ahead of all her pursuers until recently when she was contacted by an anonymous client. Promising her an obscene amount of money, enough to stage a hostile takeover of Tachikawa Electric Corporation and provide copious amounts of protection from the other elements after her. Is this offer to good to be true…?

Web hosting giant Go Daddy announced on Friday that supermodel Bar Refaeli will appear in one of the company’s two 30 second spots in this year’s Super Bowl on Sunday, February 3, presumably continuing the company’s tradition of racy advertising during the big game with an ad Go Daddy has reportedly titled "perfect match." The Bar Refaeli Go Daddy Super Bowl ad will see the Israeli model appear alongside long time "Go Daddy girl" Danica Patrick, who, after this year’s Super Bowl, will have appeared in more Super Bowl commercials than any other celebrity, at 12. While it is unlikely the ad will Youth Tuukka Rask Jersey veer too far from the company’s tried Authenitc White Dougie Hamilton Jersey and true "sexy girls" approach to marketing domains and hosting, it will be interesting to look for a new tone Elite Dougie Hamilton Jersey Elite Tuukka Rask Jersey in the ad, this Elite Gold Dougie Hamilton Jersey Elite Gold Chris Kelly Jersey being just the second Super Bowl since Go Daddy was acquired in 2011, and the first since the new Go Daddy CEO, Blake Irving, was appointed in December. Go Daddy owes its Elite Tuukka Rask Jersey powerful position in the domain name
If you’re in the market for a billiard table, you have more choices today than ever. There are many manufacturers who make beautifully handcrafted tables that are Elite White Brandon Carlo Jersey related more closely to a fine piece of furniture than to the old pool hall and bowling alley tables tables Elite Black Elite Gold Jeremy Lauzon Jersey Bobby Orr Jersey of yore. You can choose from Authenitc Black Jeremy Lauzon Jersey different woods and Men Patrice Bergeron Jersey stains to match Authenitc Dougie Hamilton Jersey your decor precisely. You can choose your color of felt, or even the color of your chalk. When choosing a set Authenitc Black Dougie Hamilton Jersey Authenitc Bobby Orr Jersey of pool balls, you of course want to Men Patrice Bergeron Jersey make sure that they meet specifications for regulation billiard balls. But if you really want to set apart your billiard room from others, you’ll want to Authenitc Gold Dougie Hamilton Jersey take a look at Elephant Balls. You might recognize the name if you have watched ESPN’s Ultimate 9 Women Tuukka Rask Jersey Ball Challenge, as they are a major sponsor. Elephant Beautiful Balls, the company’s most striking product, have served as the official tournament balls for several televised events. This is a unique set of precisely molded and perfectly finished billiard balls. Their marbled coloring, coupled with traditional pool ball colors sets them apart from standard sets, and each ball is a unique piece of art in Elite Gold Chris Kelly Jersey and of itself. If you are looking for something even more outrageous, check out the Lunar Rocks, a set of pool balls featured in the move Pluto Nash, or the Stars and Stripes set which is Elite Black Reilly Smith Jersey designed to be taken to a pool hall, and home again. Elephant Balls puts just as much care and precision into crafting its many other products, including their Traditional Series pool balls. This regulation set of perfect spheres are as durable as they are beautiful, and will play well for many, many years. In addition, their innovative training aids such as the E Z Shot Cueball and the Elephant Practice Balls have helped take many a player’s game to a higher level.